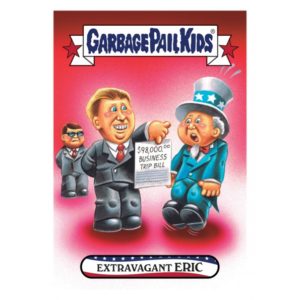 The first political release of the week brought in very similar numbers to last week’s release for Topps. Today Topps revealed the print run for Garbage Pail Kids Trumpocracy cards #54-#58. The numbers across the board matched up closely with the release last week. The GPK cards all did in the 180 range, while the Wackys did right around 300 each. These numbers are slightly higher than the records lows from a couple of weeks back. Is the reason for this because of fewer releases? It will be interesting to see the sales numbers from today’s second release of the week stack up. Here is the final information for Wednesday’s cards.