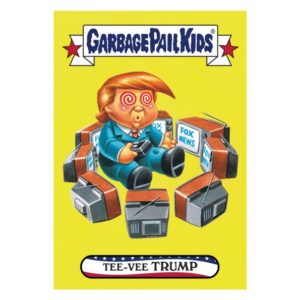 Sales for the latest batch of political cards fell for second release this week. Today Topps revealed the print run for Garbage Pail Kids Trumpocracy – The First 100 Days cards #59-#63 & Network Spews #17. Sales numbers are starting to show when Toppes releases multiple political releases in a row, the sales fall. Thursday’s release saw the GPK cards fall to the mid 100’s sold, while the Wacky’s fell to the mid 200’s. The exception to this was the Trump parody based off of a OS 1 series card, which managed to pull in 203 copies sold. Next week could bring us more online political cards along with a set based off the Oscars. Here are the final numbers for the last release of the week.