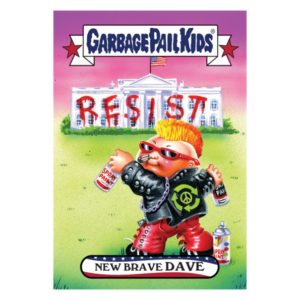 Topps third release this week saw yet another record low in sales be set. Today Topps revealed the print run for Garbage Pail Kids Trumpocracy – The First 100 Days cards #23-#28, and GPK Network Spews #7. Once again all the GPK cards came in low. The Trumpocracy GPK cards all finished right around 200. The lone exception was the card featuring New Wave Dave, which made the mid 200’s. The Wacky Packages card did see an increase at over 300 copies sold. The Network Spews card however set a new GPK low, with only 165 copies sold. Topps is all in this week with a forth release. We should have sales numbers for that release tomorrow. Meanwhile here are the final numbers for the third release of the week.