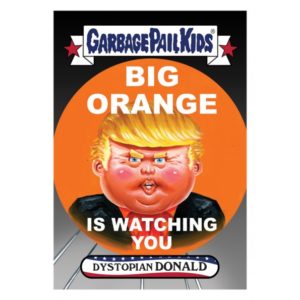 Topps second presidential release of the week saw record low number of sales for the online cards. Today Topps released the print run information for Garbage Pail Kids Trumpocracy – The First 100 Days cards #19-#22 and GPK Network Spews #6. Only one of the GPK cards released cracked the 200 sales mark. The rest finished just under with the lowest, #21, setting a new low at 187 copies sold. Topps is continue so far with a full online launch schedule of 6-7 cards a day on Tues-Thur. It will be interesting to follow to see if collector’s tire of the continued releases. Here are the final print run numbers for the second release this week: