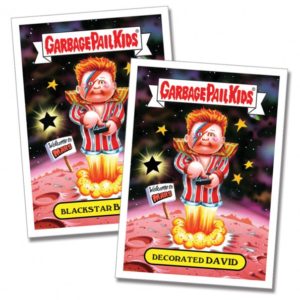 The results are in for the Shammys, and Ziggy Stardust came out on top. Today Topps revealed the print run for 2017 Garbage Pail Kids American as Apple Pie The Shammys set. Bucking a trend from the recent political sets, the GPKs all sold in the mid 200’s. The Wackys once again led the way, however with only 20-30 more copies than their GPK counterparts. Cards featuring David Bowie and Prince individually were top sellers, although numbers were close across the board. With the Oscars coming this weekend, can expect another awards based set next week from Topps? Here are the final numbers for the Shammys.