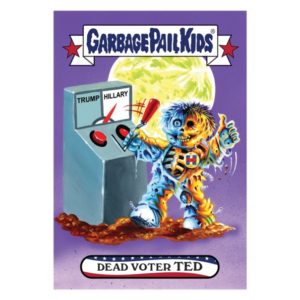 The first presidential release of the week saw very similar numbers to the releases last week. Today Topps revealed the print run for Garbage Pail Kids Truamocracy – The First 100 Days cards #14-#18 and GPK Network Spews cards #5. In what appears to be the new normal, the Wacky Packages cards all did in the mid-200’s, while the GPK themed cards finished in the low 200’s. While Topps is mixing and matching with different online brands, it looks like they will be sticking to a Tues-Thur release schedule. Here are the final numbers.