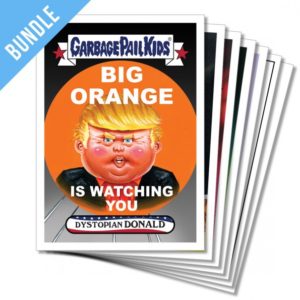 This week’s second online release from Topps brings four new cards featuring president Trump. Today Topps launched Garbage Pail Kids Trumpocracy – The First 100 Days cards #19-#22. All four cards offered today are GPK cards, and all feature our new president in various forms. Topps also today launched Garbage Pail Kids Network Spews #6. This is the first GPK card for the Network Spews set in a while, as the last ones have been Wacky Packages cards. Today’s card features a confused Winona Ryder in a GPK parody. Topps also went back to the Wacky Alternate Facts set, launching one new card in the series. Additionally a new Twister card was also launched today. Originally Topps didn’t have the Twister card listed for sale, but the card has now appeared on the site. Each of today’s cards can be purchased for $9.99 or in lots of 5 for $29.99, 10 for $49.99, or 20 for $79.99. A 7 card bundle featuring one each of today’s cards can be purchased for $44.99. Free shipping is being offered as usual via the SmartPost option. The cards are available online for 24 hours. Topps will reveal the print run at the end of the sale. Here are pictures of today’s GPK cards.