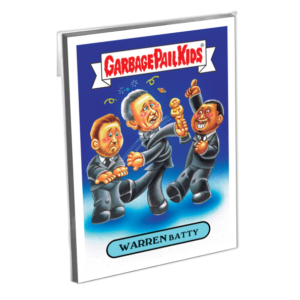 After the finish to the Oscars last night, you knew Topps would take advantage. For the second year in a row Topps has released an online exclusive set based on the Oscars. Today Topps launched Garbage Pail Kids The Not-Scars 2017. Of course card #1 in the set focuses on the crazy ending. The set contains eight different GPKs offered in two card a/b name sets. There are also two Wacky Packages stickers. One note it appears after first launching in early 2016, Topps has finally dropped the American as Apple Pie naming convention for the online sets. Each two card a/b set or Wacky card can be purchased for $9.99 each, or the entire 18 card set can be purchased for $49.99. Free shipping is being offered via the SmartPost option. The set will be for sale on topps.com for 7 days. Topps will reveal the print run at the end of the sale. Here is the checklist, along with pictures of the cards.