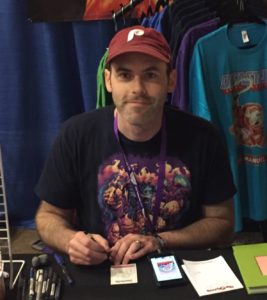 Long time Topps Garbage Pail Kids artist Mark Pingitore has decided to leave his freelance job at Topps. As he first mentioned on the GPK Underground Message board a few days ago, Mark has left to focus on his own art and his company, Magic Marker Art. His last six paintings appeared in the recently released 2017 Garbage Pail Kids Adam-Geddon set. Mark was hired by former Topps Art Director, Jeff Zapata, and started with the GPK brand on the Flashback 1 set. Mark’s front card final paintings have appeared in every set since that Flashback 1 set. I conducted an e-mail interview with Mark this week. We discuss his reasons for leaving Topps, what he has planned with Magic Marker Art going forward, and we also get a little nostalgic with Mark and his time at Topps.

GPKNews – Mark, thanks for doing the interview with me. Say it isn’t so! Recent reports have you leaving Topps to focus on your own art and brands. Why the decision to leave Topps?

Mark Pingitore – Thanks for reaching out for an interview Jeff! Yes, Adam-geddon will be the last GPK release that I contribute to. It wasn’t a conscious decision per se, but more so just the direction my focus has gone. Over the years I have done my own GPKesque parody work on the side for conventions and art shows. Doing them, I’ve really enjoyed having complete creative control, deadlines that I plan, and a consistent overall look with the artwork that producing my own stuff allows. That coupled with a general dissatisfaction of the current direction of GPK with the political focus, not enjoying or following politics really, it has just become my preference to focus on my own work, which is a more rewarding creative outlet for me.

GPKNews – In October of last year Topps sent their lawyers out on a cease and desist mission to protect their intellectual property. Many GPK artists and websites were hit with notices, including yourself, right as your Horrible Kids set was launching. How much does that experience play into your decision?

MP – I will just say that how Topps handled themselves definitely played a part.

GPKNews – In our previous interview you talked about how you collected GPKs as a kid and into high school. How hard of a decision was it to leave Topps? Did the nostalgia and something you collected as a kid pull at the heart strings a little bit?

MP – It’s always a difficult choice to commit to a big career decision, so it wasn’t without some weighing of pros and cons. I had 10+ years working on GPK though, and feel like I accomplished the original goal I had when I first started submitting ideas. It took a lot of work going from a concept artist to a final front artist. I was able to create some GPK that I’m really proud of, that I feel captured the original appeal and look of the OS sets. As I continue on in my own projects, I strive to make each one better than the last.

GPKNews – Let’s chat about the future and the Magic Marker Art brand you have. In the last year you’ve released three new sets, Disasters of the Universe 1 & 2, and Horrible Kids 1. Have those releases been successful for you?

MP – I’ve been very happy with the response to the work I’ve been releasing. I couldn’t do it without the support of those who buy the product and original art from me, so I can’t thank them enough. It was the artwork and writing that made the OS GPK so great, so making that quality and having everything flow together well is important to me. 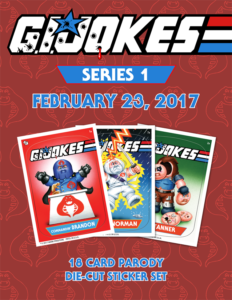 GPKNews – What’s next for Magic Marker Art? I’ve seen you post previews for a GI Jokes set that you are working on. I’ve also seen some talk about a TMNT set in the pipeline? Any release timelines in mind?

MP – I’m working on finishing G.I. Jokes right now and am planning on a February 23rd release for those. After that will be a TMNT parody set, Mutagen Canister Kids, that I have the rough sketches for Series 1 finished for. I’m looking at a late March or early April release of those, depending on when the art is ready.

GPKNews – How about long term? Do you have plans for another Horrible Kids series? Or Disasters? Any other ideas floating around?

MP – I definitely have plans for a lot more in 2017. I’d like to get a set out every month or two, and have ideas for more Horrorible Kids and Disasters, as well as other directions to go in like a classic NES parody set, other fun 80s/90s toylines/cartoons, as well as movie and comic book parodies. There’s a lot of places to go. I have a bunch of unused GPK ideas from over the years that I’d like to finish up at some point too. I also want to release more shirts/phone cases/pins, etc.

GPKNews – Do you have any other upcoming freelance work for other companies we can keep an eye out for?

MP – I’m currently working on the first in a series of children’s book I’ve been commissioned to illustrate, and will also be getting back into larger scale work that is more in the realism vein.

GPKNews – Will you continue to attend some of the comic/art conventions? Any upcoming shows planned?

MP – Yup, I’m actually planning on increasing the number of conventions I set up at this year. Mostly in states surrounding the PA area, but also some others across the US. So far I’m scheduled for Greater Philadelphia Comic Con April 7-9th, East Coast Comicon April 29th & 30th, Harrisburg Comic Con May 20th & 21st, and Retro Con October 14th & 15th. I’m also looking into others including returning to Designer Con in November.

GPKNews – I commend you for taking the chance and going out on your own. What are your feelings on making this jump? Nervous at what lies ahead? Excited about new opportunities?

MP – Thank you. It is always a scary thing to make a big change, but I’ve done it before. I worked in animation for 5-6 years before I left to freelance on my own fulltime for Topps. That was a big change and somewhat of a risk, but it worked out, so I’m excited to see where this takes me. Social media and the direct interaction with the people interested in the product is a big thing for independent artists to self-produce.

GPKNews – I believe you have six final paintings in the latest GPK release, Adam-Geddon. Any idea on the total number of GPK finals you’ve painted over the years?

MP – I have a binder of all my published GPK cards, so my count is 121, not including subsets like Adam Bomb Thru History or the Locomotion cards.

GPKNews – From Garbage Pail Kids fans everywhere I want to thank you for all the art over the years we’ve been able to enjoy. You have a lot of fans, and I know you will be missed by collectors. I know you won’t miss some of the deadlines and procedures, but are you going to miss working on the Garbage Pail Kids brand? Or will your own brand fill that void for you?

MP – Thanks very much! I’ll miss the excitement of all of the GPK collectors seeing the new cards when a set is released, and seeing different reactions, but I’ll still get that with my own stuff too.

GPKNews – Finally, I know we touched on this a little bit last time, but there has been some new releases since then. What is your favorite Garbage Pail Kid you’ve painted over the years?

MP – My favorite GPK I did is still either Wade Shade from 2015 S1, or Rick Grimey from 2014 S2. Those are my two favorite sets of the new GPK too. Thanks Jeff!

Thanks Mark for the interview! Follow Mark and Magic Marker Art on Facebook. To purchase G.I. Jokes when it’s released on Feb. 23, or to buy any of Mark’s other sets, visit the Magic Marker Art website.