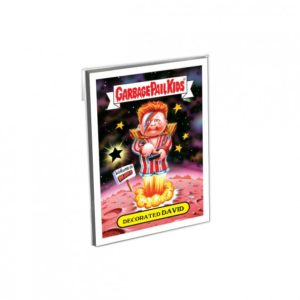 David Bowie, George Michael, and Prince all highlight today’s exclusive online offer from Topps. Today Topps launched 2017 Garbage Pail Kids American as Apple Pie – The Shammys set. This is the second year in a row Topps has done a set based off of the Gammy awards. This large 19 card set, features eight new GPK and three new Wacky Packages cards. Each GPK card comes as an a/b pair for $9.99, each Wacky card can also be purchased for $9.99. The entire set can also be purchased for $49.99. The set will be available on topps.co for 7 days. Topps will reveal the print run at the end of the sale on their blog. Here is a checklist along with pictures of the new cards.