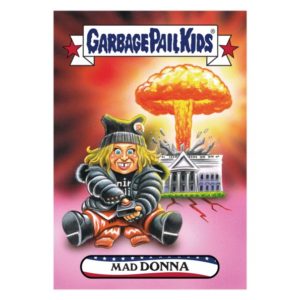 The sequel is never better than the original, right? Today Topps revealed the print run for Garbage Pail Kids Trumpocracy – The First 100 Days cards #1-#5. Were set collectors tired of Trump cards after the end of the Disg-Race set? Collectors came out and proved that wasn’t the case with the first Trumpocracy cards. Sales were a bit across the board, but very solid for the most part. The Madonna parody card led the way with 425 copies sold. Two other GPK cards were in the mid-300’s, while the other two fell shy of the 300 mark. Incidentally both the Wacky and Twister cards sold in the 300’s despite being part of their own set. It will be interesting to see if collectors continue to flock to buy up Trump. Here are the print run for the GPK cards: