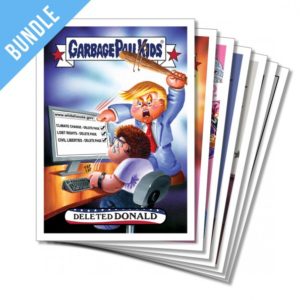 Dis-Race is over, long live Trumpocracy! Today Topps made a number of changes to their online section that sells the daily GPK cards. Part of that change was launching Garbage Pail Kids GPK: Trumpocracy – The First 100 Days. Gone are listings for GPK Disg-Race to the White House set. It would appear that set has come to an end. In its place are sections for GPK Trumpocracy, GPK Spews, a separate section for Wacky Packages: Alternate Facts, and a new art based set parodying Twitter called, Twister.

Today’s cards feature five cards based on these first few days of Trump’s presidency. Topps also launched one Wacky Packages and one Twister card under their own separate set banners. As with the Disg-Race set, each card can be purchased for $9.99 or in lots of 5 for $29.99, $10 for $49.99, or 20 for $79.99. A seven bundle is available featuring one of each card offered today from all the sets can be purchased for $44.99. Free shipping is being offered via the SmartPost option. The cards are available on Topps.com for 24 hours. Topps will reveal the print run at the end of the sale. It will be interesting to see what collector demand is for these now that the Disg-Race set appears to be finished. Here are pictures of today’s new cards.