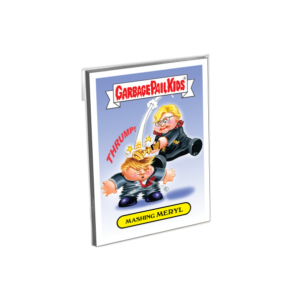 When Topps starting the GPK Topps Now cards last year a mainstay was the awards season sets. Topps is back at it again in 2017, this time parodying the Golden Globe Awards. Today Topps launched Garbage Pail Kids American as Apple Pie Golden Groans set. The ten card set features five new pieces of artwork based off of last night’s awards show. The artists were burning the midnight oil for this one last night. Thanks to Meryl Streep’s speech, that ensured we get another card featuring Donald Trump. In an interesting note, Topps is continuing to use the Apple Pie name for this set, even though the initial release was almost a year ago. Each card can be purchased as a a/b set for $9.99, the complete set is available to purchase for $29.99. Free shipping is being offered via the SmartPost option. The set will be up for sale on topps.com for 7 days. Topps said they will reveal the print run at the end of the sale on their blog. Here is the checklist and pictures of the new cards.