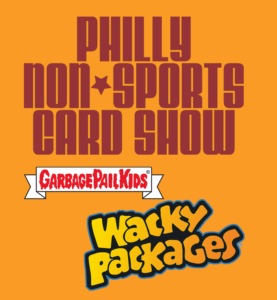 In previous years, Topps has offered promo cards at the Philly Non-Sports shows, starting back in the ANS days and through the BNS sets. This time there is a twist. Roxanne announced there would be a licensed Topps set created by the artists for sale. There are no details yet on who is doing the artwork, number of cards in the set, or the price. Roxanne did say there were six artists attending the show; Smokin Joe McWilliams, Chad Scheres, Layton DeJarnette, Neal Camera, Joe Simko, and Jeff Zapata. It isn’t clear if the set will be available for sale before the show to people not attending. However, Roxanne did mention the set would go on sale soon, as the proceeds would be used to pay for the artists hotel rooms. This would appear to be a similar license deal that the Riot Fest music festival did last year.

The Philly Non-Sport show takes place April 22 & 23 at the Merchants Square Mall in Allentown, PA. Until more details are released you can check the show’s Facebook page or their Website. GPKnews will update once more details are available.