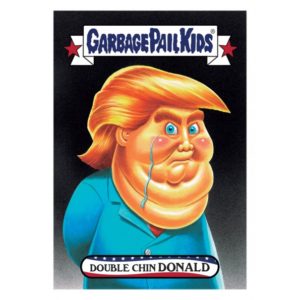 For the second day in a row collectors continue to purchase the presidential election cards. Today Topps revealed the print run information for Garbage Pail Kids Disg-Race to the White House cards #91-#94. As has been the case with previous releases, the Wacky Packs card lead the way with 467 copies sold. The GPK cards all finished in the mid 300’s. The cards all performed better than the previous day’s release. A steady steam of Disg-Race cards are to be expected through the inauguration in January. Here is the final print run numbers.