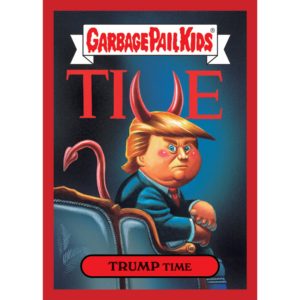 For the third presidential election release this week Topps went with a parody of a major mainstream magazine as the highlight, and boy did it pay off. Brent Engstrom’s Trump Time painting has proven to be a huge hit with both casual and hardcore collectors. Today Topps revealed the print run for Garbage Pail Kids Disg-Race to the White House cards #102-#104. For the first time since Wacky Packages cards were added into the mix, a GPK card led the way in sales. The Time magazine Person of the Year card sold 758. This is the second best selling card after card #1. Both the Wacky Packs card and the Bob Dole GPK card fell a ways back this time around. Will Topps be able to capture the same magic they did with the Time card? They will certainly try as more cards will be on the way. Here is the final print run information.