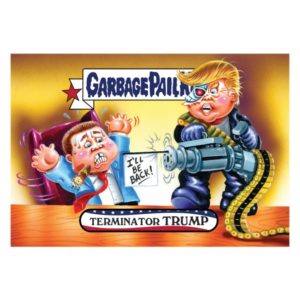 Last week’s top selling card was a GPK parody of Time magazine. This week’s cards got off to a strong start led this time by the Wacky Packages card. Today Topps revealed the print run for Garbage Pail Kids Disg-Race to the White House cards #105-#108. The David Gross painted parody card based off an old Wacky Packs card proved very popular with collectors selling 581 copies. The three GPK cards all finished around 300 copies. With more cards already posted for sale, the end of the set seems far away. Here is the final print run info.