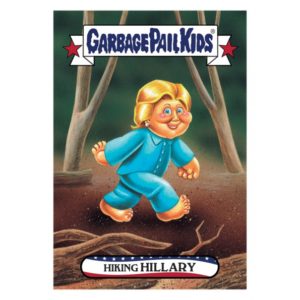 The holiday season continues, bringing many new Trump cards right along with it. Today Topps revealed the print run for Garbage Pail Kids Disg-Race to the White House cards #95-#98. Sales were down slightly for this four card version compared to the previous week’s releases. Once again the Wacky Packs sticker led the way with 407 copies sold, while the GPK cards were all right around 300. Perhaps the most surprising sales number was the fact that the Clinton card was the leading GPK sales leader. Historically the Trump cards have outsold the Clinton cards. The lack of recent Clinton cards could be the reason behind the win for Clinton this time around. Continue to look for GPK Disg-Race cards until at least the inauguration in January. Here are the final numbers.