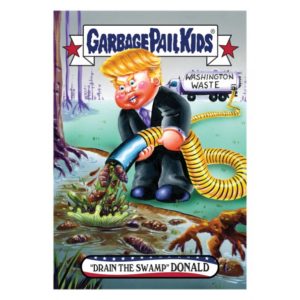 For the 4th day in a row Topps launched new presidential election cards, and collectors continue to add them to their collection. Today Topps revealed the print run for Garbage Pail Kids Disg-Race to the White House cards #78-#82. In an interesting twist, card #82 was a Wacky Packages card. While there is some cross over in collecting, the collector bases tend to be separate. It appears that Wacky collectors did come out and buy. The card was the most popular with 447 sold. I’m sure this was Topps testing the waters for a Wacky online release considering the 50th anniversary is next year. The rest of the cards sold in the mid-300’s, a little better than the previous day’s offering. Expect plenty more Disg-Race cards for at least the next two months. In a Facebook post a representative for Topps stated yesterday that Topps would continue to release Disg-Race cards at least until the inauguration day in January. Who wants some Trump for Christmas? Here are the final print run numbers.