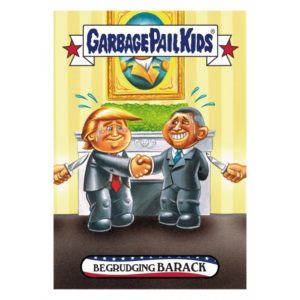 Collectors thought the GPK Disg-Race set might be finished after the election. Topps proved them otherwise as they released three new cards on Friday. Two of the cards featured alternate artwork showing different election results completed by artists Joe Simko and Brent Engstrom. Despite this being the 8th release in the last twelve days, sales remain brisk. The cards all did over 400 sales, with the highest going to the Obama/Trump meeting. The big mystery now is how much longer will Topps continue to release cards based on an election that has already ended? Here is the print run information for the latest three card release.