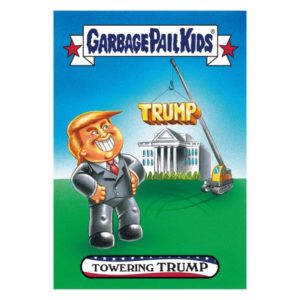 If this is the end, Disg-Race went out with a bang! Today Topps revealed print run information for Garbage Pail Kids Disg-Race to the White House cards #64-#66. Collectors once again voted with their wallets on the winning/losing presidential election cards. As has been the case throughout the online exclusives, the Donald Trump cards lead the way with a whopping 729 and 566. Those two cards become the 2nd and 3rd highest selling cards of the series, right after the first card in the set. The card featuring Hillary Clinton moving to Canada came in with 496. There have been conflicting reports on wether the set is finished. While artist Joe Simko mentioned this was the last batch of Disg-Race cards, Topps has only hinted that the end was near for the set. Meanwhile artist Brent Engstrom was busy painted cards live on Facebook last night. At the very least I expect Topps to do something around inauguration day in January, which also just happens to be the release of the next retail set 2017 GPK Adam-Geddon. Here is the final print run information: