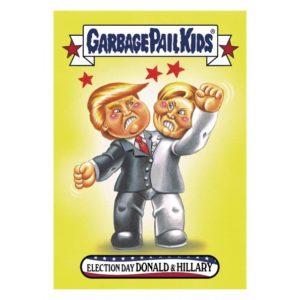 The run up to the presidential election certainly had collectors excited. Topps today revealed the final print run for Garbage Pail Kids Disg-Race to the White House cards #58-#63. This election day six card set continued to focus on current events leading up to the election, and including election day. While this was the 6th release in the last nine days, collectors still continued to purchase the cards. Sales for this release were higher than the previous releases in past couple of week. All cards were in the high 300’s, with a couple into the mid-400’s. It will be interesting to see how the post election release sales number come out. Here is the final print run information for the election day release.