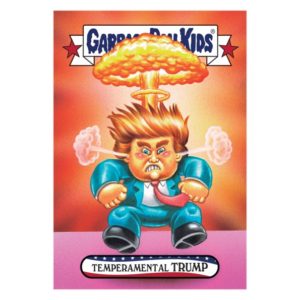 Election eve brought six new presidential themed cards to the exclusive online set. Today Topps revealed the print run for those six Garbage Pail Kids Disg-Race to the White House cards #52-#57. Sales for the Disg-Race cards remain strong leading into election day. Despite this being the 5th release in the last eight days, collectors continue to vote with their wallets. All cards came in just under or right above 300, consistent with the previous sales. With another batch of cards already posted for sale for election day, will the cards continue to sell well? Here is the print run information as released by Topps.