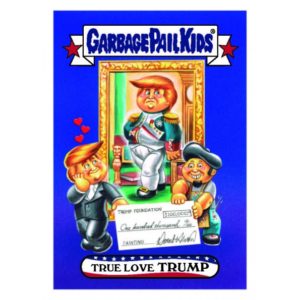 Topps is going full steam ahead as we approach election day next Tuesday. On Friday they released their forth set of GPK Disg-Race cards within five days! Today Topps revealed the print run information for Garbage Pail Kids Disg-Race to the White House cards #48-#51. Surprisingly, presidential election fatigue doesn’t appear to have set in yet. Despite this being the fourth release of the week the sales numbers show more cards sold than the third batch. It appears election hype is at its peak. There are surly going to be more to come as the big election day approaches. Here is the final print run information.