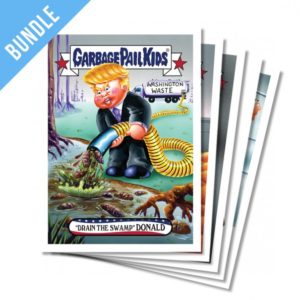 For the 4th day in a row Topps is offering new presidential election cards. Today Topps launched Garbage Pail Kids Disg-Race to the White House cards #78-#82. Today’s offering has five new cards focused on more of Trump’s transition team. Topps is trying something new with today’s cards as card #82 is a Wacky Packages card featuring Trump’s daughter. It will be interesting to see how the Wacky card is received by collectors. In a Facebook post yesterday Topps said the cards will continued to be released through at least inauguration day in January. So, expect many more Disg-Race cards to come. As usual each card can be purchased individually for $9.99 or in lots of 5 for $29.99, 10 for $49.99, or 20 for $79.99. A five card bundle featuring each card can be purchased for 34.99. Free shipping is being offered via the SmartPost option. The cards will be for sale for 24 hours. Topps said they will reveal the print run of the card after the end of the sale. Here are pictures of the new cards.