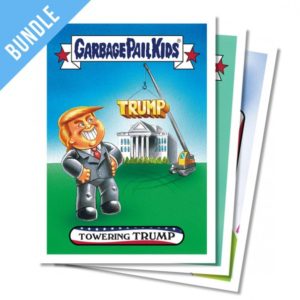 Maybe GPK collectors had it right all along? Consistently throughout the release of exclusive online presidential election sets, the cards based on Donald Trump have outsold those based on Hillary Clinton. Now we have the sticker featuring a victorious President-Elect Donald Trump. Today Topps launched Garbage Pail Kids Disg-Race to the White House cards #64-66. GPK artists Brent Engstrom and Joe Simko pre-painted winning and losing cards for each candidate prior to election day. Today we see the winning Trump, and the losing Clinton versions. In addition we also get a Trump card featuring his supporters during the election. Joe Simko made reference yesterday on his Facebook page that today’s cards would mark the end of the Disg-Race series from Topps. While no official word has come from Topps yet, a break from these cards would be welcomed. Today marks the 7th release in the last ten days. I fully expect Topps to at the very least do something around inauguration day in January.