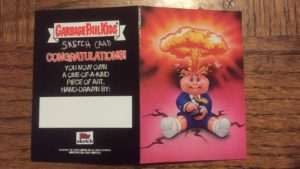 The last six weeks have been very busy for Topps and the Garbage Pail Kids brand. Topps has been busy with the release of 2016 GPK Trashy TV and the online exclusive presidential election sets. That doesn’t leave a whole lot of time from now until Jan. 20th to get 2017 Garbage Pail Kids Adam-Geddon ready for release. Last week sketch cards artists for the set have begun to receive invitations to work on the set from Topps. With an early Dec. deadline to have sketches finished, artists will be drawing cards with their turkey this Thanksgiving. In fact artists have already received their blanks, and are hard at work on those sketches. The sketches feature a black back, with a pink autograph bubble on the regular sketch front. See below for pictures of all the blank sketches, thanks for artist Magnus for the pictures!

Topps also decided to add on additional artists to the set who have all worked for Topps in the past. Joining on for the Adam-Geddon set is Jasmine Contois, Dustin Graham, Joe McWilliams and Anthony Skubis. Dustin Graham is a veteran GPK sketch artists who missed the Trashy TV set, but has worked on multiple sets in the past. The other new artists are all veteran Topps sketch artists. That brings the current total sketch artist count to 38 for the Adam-Geddon set. If anyone knows if any other artists confirmed for the set, please let me know!

Despite the large number of artists, Topps is cutting way back on the number of sketch cards each artist will complete. According to some of the sketch artists, their work load has been cut back 50% or more for the various sketch types. Its too early to tell, but this could have a huge effect on the set. If Topps prints the same amount of Adam-Geddon as they did Trashy TV, sketches will be very tough to find. Probably up to twice has hard or more on the odds. The only other possible explanation would be if the Adam-Geddon was severely under ordered by distributors for both retail and hobby. The bottom line is there will be far less Adam-Geddon sketches available this time around.

Topps has also made some changes to take note of with the sketch return card process. Once again artist’s return sketch cards need to be completed prior to the release of the set, and approved by Topps. This was a controversial change Topps started with the Trashy TV set, however this time the cards do not need to be mailed into Topps. The art director will be approving scans of the returns this time around, limiting the possibility of damage by the postal service. Another change is more additions to the “banned” character list. Previous, artists could not draw cards featuring Stan Lee, Gene Simmons, or the Hundreds set. This time around no Disney properties can be drawn, this includes Star Wars and Marvel. Also the recent music festival set cards from, Riot Fest, can not be sketched most likely due to license agreements. Finally, Topps also will no longer allow the artists to show teasers of their sketch cards prior to the release date. Personally this is disappointing, as GPKnews usually compiles all the previews right up until the release date. Let’s hope Topps backtracks from this, and realizes the previews is the best free PR Topps can get.