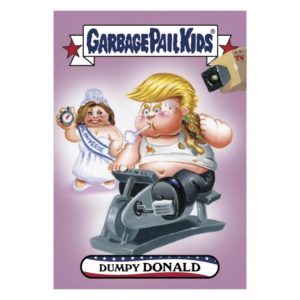 Topps has revealed the print runs for Garbage Pail Kids Dis-Grace to the White House cards #6-#9. Numbers are down slightly from the previous set of four released earlier in the week. Donald Dumpy led the way with 301, the other three were all below 300 cards purchased. Looks for more cards in the Disg-Race set to be released next week. Here is the final print run for those cards: