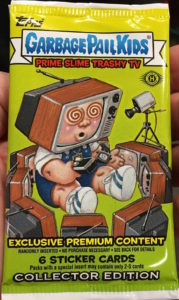 Thanks to GPK collectors Laura Ross and Ke We for sending along the Collector and Hobby Pack odds. A few things to highlight based on the Collector odds. Bloody Red parallels return to Collector packs, numbered /75 just like the Apple Pie release. Topps made no mention of these on the sell sheet. In another change, the Bloody red border cards are either pink or red depending on the card number. The red borders are the “a” cards while the pink borders are the “b” cards. This repeats a trend started in the Apple Pie series with the Black/Blue Bruised border cards. Topps has also changed  the numbering on Patches and Relics. Patches are now numbered /99, meaning there are twice as many of those compared to previous releases. It will be much easier to put that insert set together. However, the artist shirt relics are now only /50. With only 4 versions on the checklist, those will be very hard to come by.

Hobby boxes don’t have any surprises. Everything expected in Hobby packs are there. Production for Hobby boxes, like Collector boxes, appears to be right around the same as the Apple Pie series. I’ll have a complete breakdown next week with two articles taking a stab at production numbers for Prime Slime Trashy TV 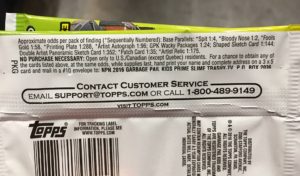 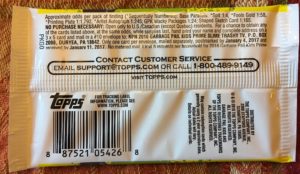