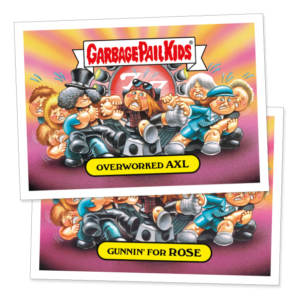 Welcome to the Jungle! Topps released the print run information for the recent set, Garbage Pail Kids American as Apple Pie Best of the Fest. The set comprised of leading acts from summer music fests, proved to be a hit with collectors. For the first time in a while, Topps received a lot of press on this set. Many music industry websites, social media accounts, and radio stations made mention of the set when it was for sale. This led to the highest selling entertainment online set so far for Topps. The only online exclusive sets that sold more copies were the first three presidential candidate sets. The Axl Rose inspired Gn’R/ACDC cards proved most popular with collectors leading the ways with 495 copies sold. Many more individual cards sold this time around, as the lowest produced card based on the Roots sold 395 copies. Here is the complete print run info as posted on Topps Blog: