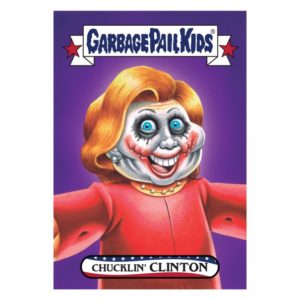 Topps jumped quickly on the 2016 presidential election debate that happened Monday night. Card #1 was a huge hit with fans, selling a massive 1196 copies. Now today Topps revealed the print run for cards 2-5 that were available for 24 hours on their topps.com store. Sales did not match those of card #1. The highest selling card was Chucklin’ Clinton at 410 copies. Despite only doing 1/3 of the sales as card #1, the numbers were still higher than most of he recent online sets. Look for Topps to continue the Disg-Race to the White House set as the election draws near. Here are the print runs as revealed on Topps.com: