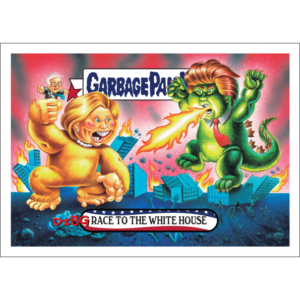 Topps released print run information today for the first Garbage Pail Kids Disg-Race to the White House card. Card #1 sold a huge 1196 copies during the 24 hours it was available on topps.com store. The sale becomes the most successful selling online exclusive card to date besting the first Donald Trump offering from the Iowa Caucus set. While Topps hasn’t yet released any additional GPK Dicg-Race cards they have released 3 separate debate cards under the Topps Banner. Those cards along with the GPK one have been placed on their website under the 2016 Election banner, print run information will be posted for each card at the bottom of that section of their site. I’m sure its just a manner of time before the next GPK election themed card will be up for sale.