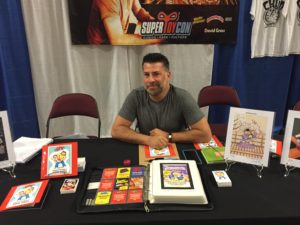 Behind Tom Bunk, David Gross is the longest tenured current GPK artist. Doing Wacky Packs and Garbage Pail Kids, David has been an integral part of Topps products for many years. On Facebook he might be better known for the rejected concepts he constantly shows. Many of those rejected concepts found their way into a book he offered at the GPK-Con. David’s book was a highlight among collectors at the show. I sat down with David at the GPK-Con in Las Vegas for an interview. We talked about how he started working for Topps, his thoughts on the 30 Years of Garbage movie, and just why he would sneak into his sister’s room as a kid.

GPKNews – With the exception of Tom Bunk, I think you are the most senior current GPK artist, you started back with the ANS 4 series I believe? I’ve read you were a big Wacky Packs collector as a kid, what do you remember about GPK from back then?

David Gross – The first sight of GPK was my sister. She was a big collector, she was younger than me. She had boxes and boxes of them. In fact I have all of her cards now. I would sneak in her room, it was the only reason I would sneak in her room, and look at her cards. I would say these are cool cards. I wish they had made these during Wacky Packs times because I would have been a big collector of them. I was in just starting high school at the time. I now have all her cards because I raided the house before my parents moved and took all her cards. She’s still wondering where they are, don’t tell her.

DG – I knew Jay Lynch from doing some Wacky Packages of my own. I was just making up my own Wacky Packs in Photoshop, and I posted them on some site. Jay contacted me and we got to be friends a little bit. When he found out they were doing the new series he said, Dave you got to send some of these over but you can’t send the ones you did. I asked why, and he said because you did them in Photoshop, they are doing paintings. I was like alright cool. So I whipped out the paints and actually painted some. I was doing 5-foot by 5-foot paintings at the time, so doing something 5-inches by 7-inches was a little confusing to me at first. I’m so use to gigantic brushes. I had to find the smallest brushes I could find. I did three samples and sent them to Jeff Zapata. The same day I sent them, Jeff called me up and said we are going to use one of your pieces in the series as a bonus card, which was the Asteroids. Then, I immediately started doing the second series with them. I did 30 something pieces in the second series. This year I’ll be at 500 at some point.

GPKNews – Are you finished with the art for the next GPK set, Trashy TV? Is it full steam ahead on art for the first 2017 set, Adam-Geddon now?

DG – Yeah concepts have already been worked on. We are just starting the paintings. In fact when this is over I’ll be going home and start doing some of those.

GPKNews – You show your rejected concepts on your Facebook page, which is always a blast to look at. What % of concepts do you submit that actually get the green light?

DG – I’d say two thirds. I kind of have a good idea. Lots of times I’ll write them before I draw the thing, and say here’s the idea behind it do you like that or not. So I don’t have to waste the time with something they are flat out going to say no to. Lots of times he’ll say it sounds like a good idea but we have to see it first. You’ll get rejects when I do that, but it cuts it down a little bit.

DG – I don’t know the exact amount. I could probably figure it out, but I know its roughly 500 total Wacky and GPK after the 50th Anniversary Wacky set comes out.

GPKNews – You’ve mentioned to me this is the first show you’ve attended as an artist. What are your thoughts? Have you enjoyed meeting with fans of your work?

DG – I did San Diego Comic Con and New York Comic Con with Topps, but it was just going to their booth. I didn’t set up by myself. I set up there for a couple of hours and sketched for them. It’s cool every single person that’s come up I’ve contacted or talked to at some point through Facebook or eBay. Now I know everybody’s face. I’ve talked to these people many times and never knew what they looked like or had any meaningful conservations with them, other than talking about the artwork a little be briefly via Facebook. Now we are having some nice conversations. I’m meeting their kids, meeting their wives, so it’s cool. 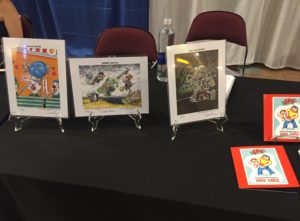 GPKNews – At the show you are selling your reject book, your original art, roughs, and prints. Any other projects you have in the pipeline?

DG – Working on Wacky Packages 50th Anniversary set which will be for next year, but we are doing concepts for that. Then I assume there will be some more online sets. If there are any slow periods I’ll be painting some of my rejected ones and doing commissions. For the reject books I’ve got at least another hundred or so here. There are 30 something in the first book. I’ll just change the color of the book and do volume 2, volume 3… A lot of these are things I really wish had gotten in some of the sets.

GPKNews – You were interviewed for the 30 Years of Garbage doc. What did you think of the movie? What are your thoughts about being part of GPK history.

DG – I was blown away by the movie. I went to the premier with my family. They were blown away as well. We could not believe the quality of the movie. You would think it would be some low budget thing, but this is high quality, Academy Award documentary best feature material here. Great graphics, and the music was great. It was fantastic! We really loved the film. It was really cool to see yourself on the big screen.

DG – New Wave Dave of course, its my name. It really seems to be, over Adam Bomb, the biggest request I get seems to be that character. The characters I get the most requests for are Joe Blow, Adam Bomb, and New Wave Dave. New Wave Dave is my favorite for many reasons; I was into punk rock when I was young, wrote on a lot of walls… Of the ones I’ve drawn, the Willy Wonka one is up there. I like the Pac-Man one I recently I did. Also, the Marcel Duchamp one I did for the Artistic Influence, I really like that one a lot.