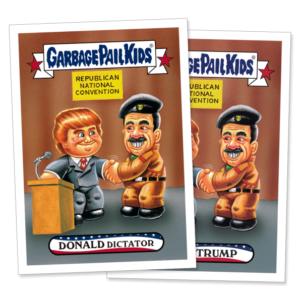 In the race to see who wins the Garbage Pail Kids Presidential Nomination, who wins? In a close race it appears the Republicans have won. Back during the Republican and Democratic conventions Topps offered exclusive 10 card online sets to collectors. After all the hanging chads have been counted, the results are in. Here is the print run information for both the Democratic and Republican sets as revealed on Topps Blog:

Sales numbers for both of these sets was slightly higher than the previous online exclusive sets. The sets being for sale during the conventions may have caused a slight uptick in sales. Also, for the first time Topps revealed how many complete sets were sold as part of the numbers. Only two cards from each set sold any individual copies, with Trump leading the way. We’ve gone a couple of weeks without any new sets, will there be more on the way?