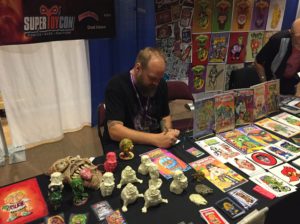 Chad Scheres loves his monsters. That’s evident when looking at his table full of custom made monster figures. In addition to being a sketch card artist on Garbage Pail Kids and Wacky Packages, Chad focuses on drawing and selling monster related cards and figures. I sat down with Chad at the GPK-Con in Las Vegas. We talked about how he got started with Topps, what he collected as a kid, and what’s in store in the future for his work.

GPKNews – You started doing pack inserted GPK sketches this year with the American as Apple Pie set. How did you get involved with Topps and doing GPK sketches? Have you done any work for other card sets?

Chad Scheres – There was a post on Facebook a few years ago that they were bringing back the Ugly Stickers. That’s what I was loved from being a kid. I draw monsters and ugly stuff, so I sent them some samples. I said I can do that, I draw ugly monsters, and forgot all about it. A few months later they sent me an e-mail and said they wanted me to do this Artists on Demand thing. I’m like great, I love Topps and always wanted to work for them. I did a couple months of Artists on Demand. Then they cancelled that and I started doing more samples for the Garbage Pail Kids and Wacky Packs. Then I did American as Apple Pie, and did the MLB Wacky Packs. I just finished up the Trashy TV sketch cards, and now there will be another series in January coming out. I’m still waiting to hear on the 50th anniversary of Wacky Packs, because I would really love to work on those.

GPKNews – Were you a GPK fan/collector before you started doing the sketches?

CS – I knew all about them and thought they were cool. By the time they came out in 1985 I was in high school, so I was off on other things. I’m more of a Wacky Packages guy because that’s what I collected as a kid. As far as Topps stuff goes, it was all Wacky Packages and Star Wars when I was a kid. I saw GPKs and thought they were cool. I had picked some up over the years, and picked some up when the new series came out in 2002 and 2003. I picked up a few of those, but I didn’t really start drawing them until after I got on with the Artists on Demand thing. I didn’t know what a sketch card was at that point. Once I started doing that, I started drawing really small because my stuff is on a bigger scale. Now that I’ve drawn so many of these things I’m getting better at it.

GPKNews – How is the work coming on the sketches for the next GPK set, Trashy TV? I saw some of the previews you posted on Facebook, they look great!

I’m done with the required cards. I still have to do my artists returns. I just got my duel artist cards back the day before I left here, so next week is going to be busy.

GPKNews – Do you know who your partner is on the Duel Artist sketches? Are there artists you would like to work with?

GPKNews – Have you seen the 30 Years of Garbage documentary that Jeff Zapata and Joe Simko directed? What did you think?

CS – I’ve seen it twice. I watched it once, then had it on a second time while I was working and listen to it. It’s great, I loved it, very informative.

GPKNews – What are your thoughts about being part of that history now?

CS – I love being a part of it, it’s great. When I was a kid I would ride my bike to the store to buy Wacky and Star Wars cards. The Topps logo and the brand has always been a part of my life. So actually being able to work for them and getting a paycheck with that logo on it was really cool, it’s great.

CS – Usually I’ll do 2 or 3 depending. I’m from Spokane, Washington so there’s always one there that I do every year. I’ve done Emerald City Seattle Comic Con. I didn’t do it this year but might to it next year. When I saw this pop up I definitely knew I had to be here for this one. 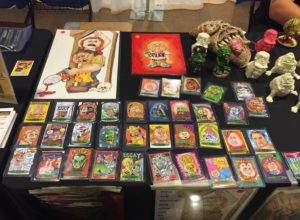 GPKNews – This is the first GPK-Con what are your thoughts of the show so far? How has the GPK fan turnout been for the show?

CS – Its great, there’s been a good turnout and the fans have been great. It’s nice to connect faces with names because I talk to people on Facebook all the time. It’s nice to meet them in person.

GPKNews – At the show you are selling some of your own sketch work and prints. Do you have any other projects in the pipeline either with your own work or for another company?