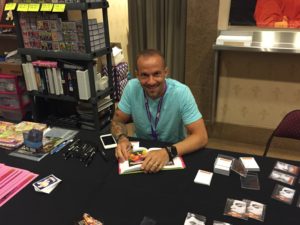 Garbage Pail Kids sketch artist Jon Gregory started with Topps working on Wacky Packages sets. He began on GPK with the 30th anniversary set, and is quickly becoming a favorite of sketch card collectors. I sat down with Jon at the GPK-Con in Las Vegas and we talked about how he got started with Topps, collecting as a kid, and what he has in store with his sketch cards.

GPKNews – You started doing pack inserted GPK sketches with last year’s 30th anniversary set. How did you get involved with Topps and doing GPK sketches? Have you done any work for other card sets?

Jon Gregory – Topps is the only card company I’ve worked with. How I got into it is a funny story. I was selling some old Wacky Package material on eBay. I got a correspondence asking if I had certain things in my collection and I didn’t. I happen to see that it was signed, “Smokin’ Joe”, and I thought the guy was being funny using the Smokin’ Joe name. I started thinking about it and starting wondering if that was the actual artist asking about that, but why wouldn’t he have these cards if he was the artist. So, I asked and it turned out it was him. We started talking and I told him I had a bunch of ideas. I’ve been trying to get into this for 20 years and never knew who to contact. I sent him some sketches. He liked them and said the jokes were good so he passed them along to Neil Camera. Then, I started doing the Artist on Demand stuff with Neil. After that I got contacted by Topps do to the Wacky series first. I did 2 Wacky series, then they asked me if I wanted to do Garbage Pail Kids. I said sure I’ll do those too. So I’ve been doing those consistently ever since. If I didn’t sell that stuff on eBay I wouldn’t be sitting here talking with everybody.

GPKNews – What do you remember about GPK from when you were a kid?

JG – The first thing I had GPK was an OS 1 uncut sheet, my mother bought me an uncut sheet. They were selling them at a Ben Franklin, they had them up on a wall. She brought it home and said look what I got. I was like what it this? I unrolled it and was, wow they were cards that were not cut. I didn’t understand the whole concept of it. From there I started buying the packs and everything else and kept the sheet, I have a Wacky uncut sheet too I got the same way. You don’t see those sold in stores ever, so it was pretty cool. I still have them.

GPKNews – Your sketch work is great, you are becoming a favorite of GPK collectors. How is the work coming on the sketches for the next GPK set, Trashy TV?

GPKNews – Do you know who your partner is on the Duel Artist sketches? Are there artists you would like to work with?

JG – Eventually I would want to work with all these guys. A lot of these guys are the reason I’m here. I’ve admired them for years, and to be grouped in with them is a little surreal. As far as the duel cards, I got paired with Jason Heil. I just got them before I came out here so I haven’t had a chance to start them yet, but we are paired up on this set together. He seems like a nice guy we talked a little bit.

GPKNews – Have you seen the 30 Years of Garbage documentary that Jeff Zapata and Joe Simko directed?

JG – I’m a bad fan, I have not seen it yet. My copy is in my bag. I got my copy and I’m popping it in as soon as I get home. I was away for the premier or else I would have been at that because it was in New York. I just wasn’t available that weekend. I was kind of bummed about it, but I knew I would see them here and get my copy. I am looking forward to seeing it.

JG – This is my first show. I’ll probably be doing more. I’ve been talking with Jeff Zapata about doing some in our area. I’m sure I’ll be appearing at others in the future. As more and more people get to know me, and get to know my style I’m starting to branch out so its exciting.

GPKNews – This is the first GPK-Con what are your thoughts of the show so far? How has the GPK fan turnout been for the show?

JG – When I first saw the show was advertised I didn’t realize there was never one before. I couldn’t believe they never did one before. When I saw it I wondered if I could get in on it. Then when I found out it was the first one I knew I had to get in on. It’s perfect for me. I’m a newer artist getting a good response, so it would be good exposure for me in the community to go to this. I contacted everyone I needed to just to make sure I could attend. 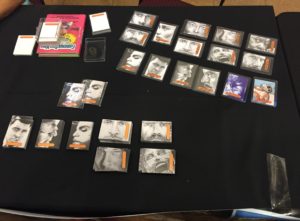 GPKNews – At the show you are selling your GPK inspired prints and some of your own artwork. Do you have any other projects in the pipeline either with your own work or for another company?

JG – I’m working on my portrait stuff, that’s big. A lot of it is commission work. A lot of people want their kids done and their grandmothers. I started doing the series of the famous portraits so everyone could see the style. The requests come from those. I’ve gotten a few requests to do the garbage pail kids returns done in that portrait style, which I thought was fun because no one has even done that before. I’m trying to find a little niche for myself to separate myself from other artists. Hopefully it’s a style that will catch on because its one of my favorite mediums.

JG – I just got asked this this morning. My favorite garbage pail kid, I guess it would be the most requested I get. I’ve done two the most of any so far and that’s Melton Elton, which I love doing, and Live Mike. I think Live Mike is my favorite and he’s on the back of my sketch cards. I’ve done those two the most and people seem to love the way they’ve came out.