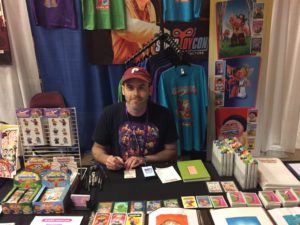 Mark Pingitore is another of the current crop of Garbage Pail Kids artists that got his start with the Flashback sets. Not only does Mark paint GPKs, but he also has his own card, sticker, and t-shirt line from his Horror and Slop Culture Kids to his very popular Disasters of the Universe set. I sat down and talked to Mark at the GPK-Con in Las Vegas recently. We talked about how he was brought on at Topps, some current projects he has in the pipeline, and how getting married to his wife was GPK destiny!

GPKNews – You are a veteran GPK artist now, you started back with the Flashback series I believe. Were you a GPK collector as a kid?

Mark Pingitore – Big time! I collected them alI. I don’t know if I collected up through series 15, but definitely into the later series. Then in high school I started collecting them all again. I got all the old sets I didn’t have as a kid. I’ve always been a big fan.

MP – I was collecting the new sets, the ANS sets, and I knew other people had submitted concepts and had gotten ideas accepted. So I just started e-mailing Jeff Zapata, our Art Director at the time, and just trying to get some people to notice the ideas I was sending in. After a couple started getting accepted, they would contact me when a new series would start. It kind of snowballed from there.

GPKNews – Are you finished with the art for the next GPK set, Trashy TV? Is it full steam ahead on art for the first 2017 set, Adam-Geddon now?

MP – Yeah we are in early stages for the next set. We are still deciding on concepts. I’ve already submitted a bunch of concepts. They are sorting through the ones they want to use. A few have been done for the advertising of the set and announcing it. We are still in the midst of working on the next set

MP – I did seven this time, there are seven finals.

GPKNews – For the first time you aren’t doing any pack inserted sketches for the Trashy TV set. Was time the biggest issue? Too busy with the art for upcoming GPK projects?

MP – Yeah I feel like I saw they had a pretty decent list of people who were participating in the sketch cards. I was originally going to do them, but work started on the next set. I figured I might as well focus on that this time around.

MP – I usually do around 2-3. There are a couple that are local to me in the Philadelphia area that are pretty convenient to go to. I go to at least one of those a year. Then I try to get to get to either New York or San Diego, or I’ve been to Phoenix. Usually 2 or 3 a year.

GPKNews – This is the first GPK-Con what are your thoughts of the show so far?

MP – I think its been great. I was curious to see how it was going to be. Usually when I go to a convention I’ve gone with other artists. At most 2 other GPK artists. I was curious how it would be to have so many people doing the same thing, but its been great so far. A lot of fans have come to check it out, so far so good. 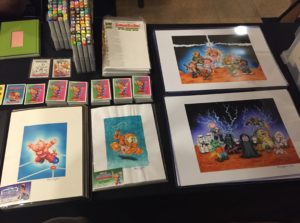 GPKNews – At the show you are debuting your Disasters of the Universe set, you also sell t-shirts with your artwork and some prints. Any other projects you have in the pipeline?

GPKNews – You were interviewed for the 30 Years of Garbage doc. What did you think of the movie? What are your thoughts about being part of GPK history.

GPKNews – The artwork you did for you are your wife, not only the “ball and chain” piece for your wedding, but the “Bun in Becky” piece to announce the upcoming birth of your child is just fantastic! Congrats on that upcoming birth. What was your friends and family reaction, and I guess more importantly your wife’s reaction to those? She must have a great sense of humor!

MP – I was surprised actually, when I first met her. Usually when I tell people what I do, unless they collected them when they were younger, sometimes they don’t know what they are or weren’t a fan. I told her I worked for Topps and the first thing she asked was if I worked on Garbage Pail Kids. So that was kind of a sign that it was a good match. She knew what they were.

MP – My favorite Garbage Pail Kid of all time is Cracked Jack. OS 2 is my favorite. I think that is the pinnacle, just all the art and all the concepts. I feel like either 2 or 3, but Cracked Jack from 2 is my favorite. I don’t know why, just the artwork and the concept always stuck out to me. Favorite that I’ve drawn would be either the Rick Grimey, the Walking Dead one I did, I was really happy how that one turned out, or the Venetian Blind one the Wade Shade.