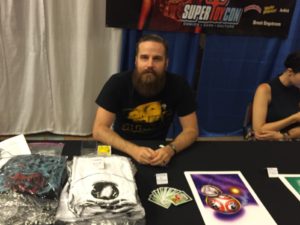 Veteren Garbage Pail Kids artist Brent Engstrom lends his art to not only the main GPK sets, but also to online and special sets Topps produces throughout the year. As one of the mainstays for Topps, Brent’s art is everywhere. I sat down with Brent at GPK-Con in Las Vegas. We talked about collecting GPKs as a kid, how many pieces he completes for Topps, and the part he plays in GPK history.

GPKNews – You are a veteran GPK artist now, you started back with the ANS 5 series I believe. What memories do you have of GPK from when you were a kid?

Brent Engstrom – I just collected them like everyone else did. When they first came out I had some friends that had them. I would see the cards and start buying them at gas stations. I do remember when I got a little bit older I took them all off and stuck them places. I don’t have any of my original ones anymore.

BE – During the All New Series series I noticed they came back and I was submitting my portfolio around to different companies. I just did it on a whim not thinking much would happen, but I got a response right away. I had a practice painting I had to do to get in. They liked it enough to let me paint another one and then it led from there. It was pretty quick once I got the initial response from Jeff Zapata. It moved pretty quick and I started painting right away.

GPKNews – I assume you finished with the art for the next GPK set, Trashy TV? Have you done any paintings for the first 2017 set, Adam-Geddon?

BE – I have yes, I’ve painted one so far for Adam-Geddon, and when I get back from GPK-Con I will jump into that full time.

BE – Right at 40 I think. It’s hard to know because sometimes they push them to other sets, but its right under 40.

BE – Having a folder on Facebook I’m able to see the number easily. It’s over 300, its like 335 or something finished paintings.

GPKNews – For the first time you aren’t doing any pack inserted sketches for the Trashy TV set. Was time the biggest issue? Too busy with the art for the upcoming GPK projects?

BE – Yeah as soon as you’re done with one set you start working on the next. I used to have a little bit of a break to do sketch cards but I don’t have a break anymore. I’m not able to squeeze them in anymore so they got pushed. Then there are a lot of new sketch artists than came in and they’ve kind of taken over that. 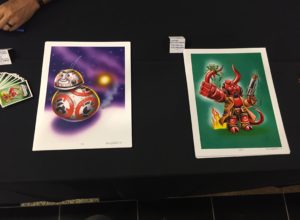 BE – Not very many, I go to smaller conventions around my town. They are nothing like this. They are usually comic conventions so no one knows what Garbage Pail Kids are. This is a lot different.

GPKNews – This is the first GPK-Con, what are your thoughts on the show so far? How is it meeting the fans face to face?

BE – That part has been cool. I talk to a lot of them online and its kind of cool to get a face with the name. It’s cool to get to know them and see what cards they collect and which ones they like. Usually I don’t even know if someone likes a certain character until they hand me some cards to sign. Then I can see, oh people actually like that one.

GPKNews – You were interviewed for the 30 Years of Garbage doc. What did you think of the movie? What are your thoughts about being part of GPK history?