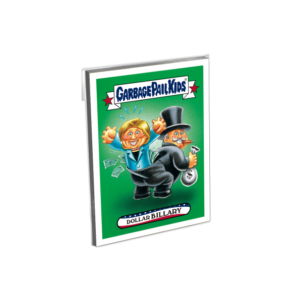 Last week was the Republican National Convention, now it’s the Democrats turn. Today Topps launched Garbage Pail Kids American As Apple Pie Democratic National Convention set online in their store. Just like with the Republican set, the set features 5 new pieces of artwork offered in two card a/b sets for $9.99 each. The entire 10 card set can be purchased for $29.99. Once again, free shipped is being offered via the SmartPost option on their site. Also like the Republican set, this set will be available for 7 days on their site, with the sale ending 8/1 at 12:00 eastern time. Topps said they will reveal the print run on their blog after the sale. What’s next? Maybe the Vice President candidates will be making an appearance soon. Here is the checklist along with pictures of the new cards: