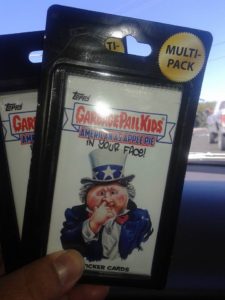 GPK collector Ronnie Pasillas looks to be the first to come across a new Blister pack of Garbage Pail Kids American as Apple Pie packs in stores. Packaged by the Fairfield Company, a division of Excell Marketing. Inside each Blister is two retail packs of GPK AAAP. Ronnie found these at his local Rite Aid store for $4.99 each. A few weeks back collectors began to notice Excell had pulled AAAP packs from Target instead of letting them sit on the shelves as is usual. It would appear those packs are now showing up as part of these Blisters. Earlier this year Fairfield/Excell launched a very successful Trash Box consisting of previous released 2012-2014 packs of GPK. Thanks to Ronnie for the info! 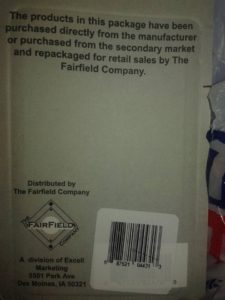