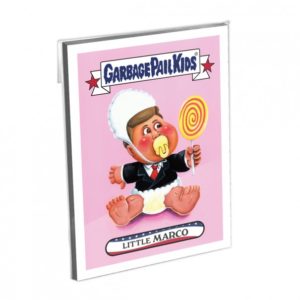 Topps announced the print run today for their GPK Apple Pie Presidential Losers set. This 20 card set was sold on Topps website last week during a 48 hour period. This set continued Topps summer run of offering presidential election themed set, however this time the front runners and most popular cads were not included. Here is the print run as revealed on Topps Blog:

As has been the case with the last few sets this group of cards set another new sales low for the online exclusive sets. With the exception of the Chris Christie card none of the others broke the 180 mark. Without Donald Trump and Hilary Clinton in the set it failed to grab as much interest as previous sets. Look for Topps to continue offering presidential sets through the November election.