During the last month Topps has launched a number of online only Garbage Pail Kids products, mostly as 24 hour special sales. However, in the middle of those sales Topps offered 3×5 cards of Presidential Candidates Campaign Posters. Topps also offered posters of their Shammy and Presidential Candidates sets. There has been confusion among collectors as to what Topps shipped vs. what was being offered.

During the sale for the 3×5 Campaign Posters Topps offered both a base version numbered /199, and a gold version /49. Collectors were dismayed to find when they received these sets there was no numbering on the cards. Multiple collectors spoke with Topps customer service regarding the lack of numbering. Collectors were told various things from returning the sets to destroying the sets and sending Topps proof. Instead it looks like Topps has decided to send everyone who purchased those sets, replacement sets that are numbered. Customers began receiving tracking numbers this week, even if you haven’t spoken to Topps. Collector Eric Baker was one of the first to receive his replacement base set, and they are now stamped on the backs with numbers. 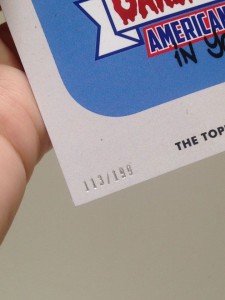 It would appear that there will now be two versions of these sets both base and gold, numbered and unnumbered. If purchasing on the secondary market be sure to know which version you are buying.

To add to the confusion, customers who purchased the Shammy and Presidential Gold 1/1 posters from Topps also began receiving additional copies of their posters in the mail this week. Both GPK collectors datdamonfoo and heehawes received another copy of their Gold 1/1 posters. The funny thing is their original posters were already hand numbered 1/1. So now they have two 1/1 posters. So it would appear the Gold posters being offered by Topps are not 1/1, be aware of additional copies on available on the secondary market. 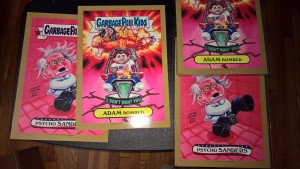 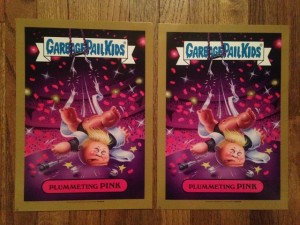