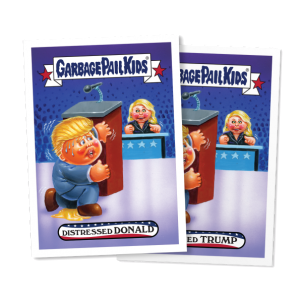 Despite their second special 24 hour online GPK sale within a three day period, the Super Tuesday GPK Presidential Candidates Set proved to still be a hit with collectors. While selling less than the New Hampshire set, and half of the Iowa set, the Super Tuesday set still outsold the Not-Scar set by almost double. Political candidates are proving to be quite popular among GPK collectors. As with the primary results the best selling candidate cards show to be the leaders of each party. Here are the print runs for the Super Tuesday set as revealed by Topps via their Topps Blog.

Topps continues to receive mainstream press via Gizmoto subsite Toyland. As part of their article Toyland says this will be Topps last candidates for a few months. With former candidate Mitt Romney and New York Gov. Michael Bloomberg making noises about running, will Topps be able to hold off?