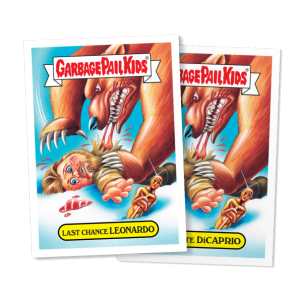 Leonardo Dicaprio was a big winner at the Oscars this past weekend, but did he also come home with a Not-Scar? Topps online sale went live just a couple of hours before the Oscars aired. First announced as a 24 hour sale, Topps allowed the cards to be sold online for over 36 hours. It took a few days, but as promised Topps released the print run for all cards offered as part of th Not-Scars set. And the Not-Scar goes to…

Despite being on sale the longest of the special 24 hour sales, the Not-Scars set compared in sales to the Grammy parody set the Shammys. Both sets will be more limited than their political counterparts.