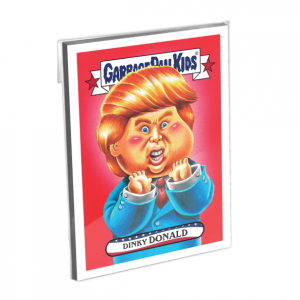 As promised over the weekend, Topps today launched the Mega Tuesday Presidential Candidates set online via their store. This time around there are 16 total cards in the set. Four candidates are represented by two different pieces of new artwork each with a/b versions. In a change from previous releases you can purchase each two card candidate set for $7.49, or you can purchase the entire 16 card set for $39.99.  In a change from previous sets they will only be on sale for 48 hours, and Topps has promised to reveal the print runs on their blog tomorrow. Topps is also offering free shipping on GPK products when spending over $100 during this time frame.

Here is a checklist of cards in the set along with the artwork.