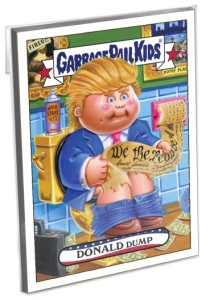 Earlier this afternoon Topps released for sale a Special Iowa Caucus Parallel of the 10 Presidential Candidate cards found in the 2016 Apple Pie set. In an e-mail sent this morning announcing the set was on sale, Topps announced that separate 2 card sets of each candidate could be purchased for $9.99 each, or the entire 10 card set can be purchased for $29.99. The cards feature a different name plate similar to the Classic Patriots Insert set, and a state stamp of Iowa on the back. In a twist Topps announced the print run will be determined based on the number of cards purchased. Topps said they would announce the print run Tuesday on their blog.

After the cards went live on Topps e-shop, they entire Topps website locked up. Customers were greeted with error messages or long loading times. At one point during the sale the Iowa Sets disappeared from Topps website. The cards however, did return with faster loading and purchasing times. Four hours after launching the sets Topps apologized for the website issues and announced the cards were back up for sale via their Twitter account.

Sorry for the delay. But the GPK Iowa Caucus parallels are back up. https://t.co/TX4dhLOCMS #iacaucus

It would appear demand for the set was sky high, especially when the cards launched. Topps received main stream media coverage this week from major websites discussing the Presidential Candidates subset within the 2016 Apple Pie Set. Popular Tech website Gizmoto.com published an article this morning on their website which was retweeted out numerous times and had the general public discussing the Iowa Caucus Parallel cards. This follows an article last week in the New York Daily News also discussing the Presidential Candidates subset. It remains to be seen if the extra mainstream exposure for these new Garbage Pail Kids will result in high sales for the Iowa Caucus set.

You can still purchase the Iowa Caucus Presidential Candidate Parallel set online until the 24 hour sale is over. We’ll update this article with production numbers once Topps posts the results.