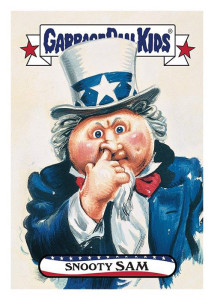 Online retailer Steel City Collectibles has begun online pre-orders for Blaster boxes of the upcoming 2016 GPK American as Apple Pie In Your Face set. New information posted on their website gives some insight into what can be found in both Blaster boxes and Jumbo Retail packs.

Perhaps the biggest news is Loaded Sketch cards will move to Blaster boxes. In the previous GPK release those sketches were found in Collector boxes. Panoramic Sketch cards, which in the previous release were in Blasters, will now be in Jumbo retail packs.

“Bonus” cards also look to be a thing of the past, as in the previous release. Blaster boxes will contain 3 Gross Bears stickers while Jumbo packs will contain 1 Patriotic GPK reprint per pack. It also appears Green parallels will return to retail packs once again. No word yet on Target or Walmart exclusive parallels.

The next set is due to hit store shelves on Jan. 20th. See below for more info on retail offerings.

GPK American as Apple Pie In Your Face Celebrates the history of the USA with 9 All-New Never Done Before Themes!

NEW Classic Patriot Stickers (2 per pack): Reprinting 18 of the most patriotic GPK characters from the 80s in a new red, white and blue design! – JUMBO PACK EXCLUSIVE! NEW Puke Splatter Parallel (1 per pack): Base splatter parallel in puke green! – RETAIL

Plus! 88 More Stickers to Collect!