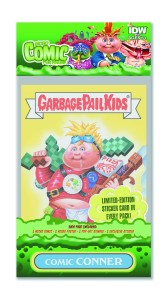 As we’ve covered here previously IDW was set to release the GPK Micro Fun Packs, containing mini versions of the GPK comics, special promo cards, and other goodies. Originally the Fun Packs were set to release in April 2015, pushed back to June of 2015, then pushed back again to October 2015. Just a couple of weeks ago IDW decided to cancel the project all together. Word on the street has it there were not enough pre-orders from distributors to continue with the project.

One thing to note for rare GPK collectors. There are uncut sheets of the promo cards out in the wild. A Topps rep gifted a few of these to various folks over the last few weeks. So you might come across one of these rare sheets.